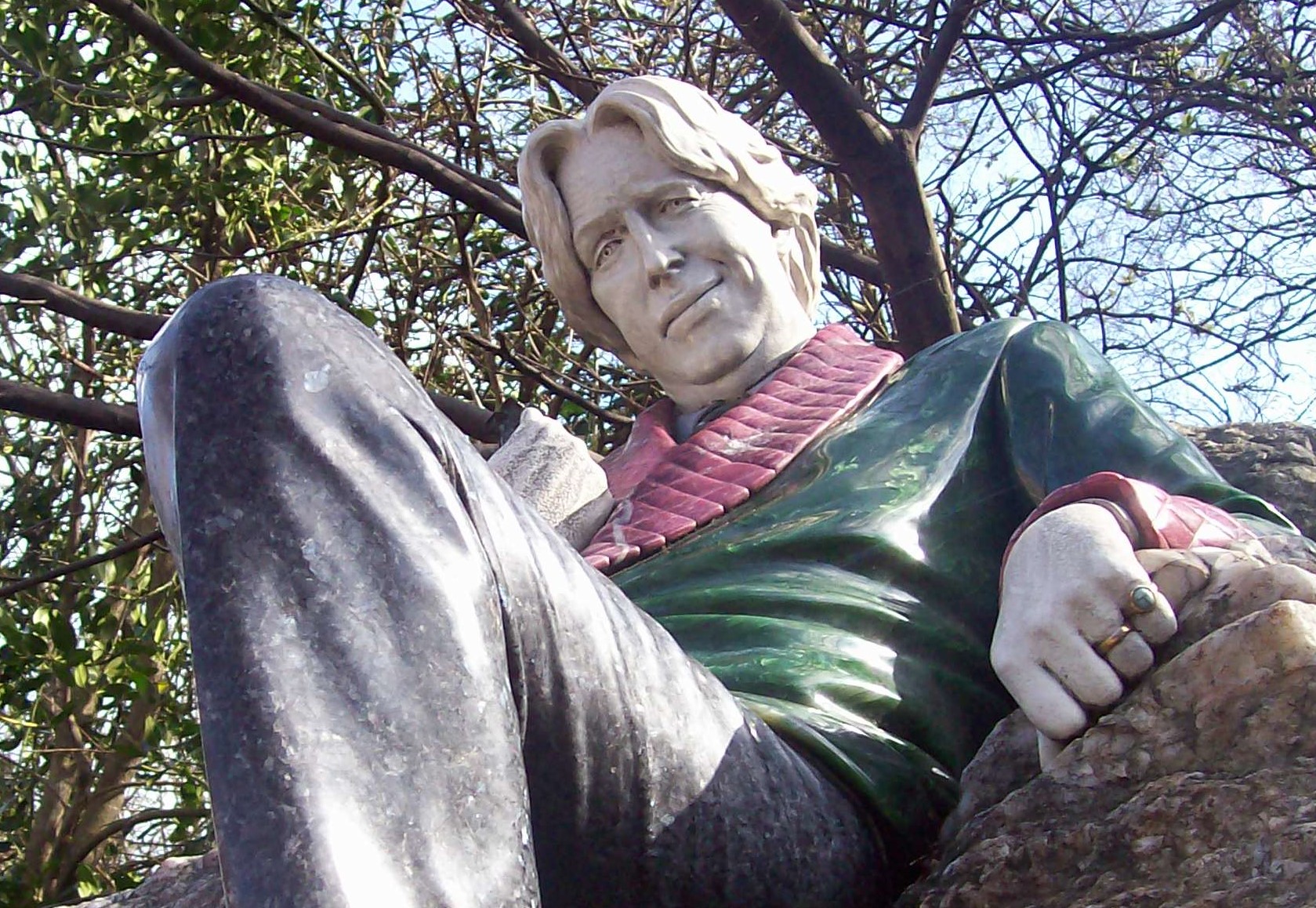 Oscar Fingal O'Flahertie Wills Wilde, one of the greatest Irish writers, died in Paris on 30th November 1900. On the 120th anniversary of his death, Maciej Stroiński, translator of "De profundis", reaches beyond famous Wilde’s wit and his personal tragedy and tells us more about Oscar that many of us did not know.

Remarks on Oscar Wilde on the 120th anniversary of his death

Oscar Wilde died of acute meningitis on 30 November 1900 in Paris. He was 46 years old, but we cannot say - “If only he could have lived longer”. For it is hard to accept that he was alive at the end of his life. If so, then he was alive only with his body because his heart had died before that. From an earthly perspective, he died with his civil death. Then everything associated with his life story suddenly ended. The worst of it was however, that he had already died in an artistic sense. His last play, The Importance of Being Earnest, was written in England shortly before his imprisonment. After serving his sentence for "gross indecency" he had only managed to publish The Ballad of the Reading Jail, under a pseudonym; and it took sixty-two years to get De Profundis, the famous prison letter, printed.

In 1900, Wilde was ready to pass away along with the nineteenth century (alongside Nietzsche and Ruskin). He was already getting ready for the assumed eternal life that he had earned, whether or not you believed in "such things". If it were not so, if he had not lived in eternal glory, no one would remember today’s anniversary. His tomb at Père-Lachaise is a much-visited secular pilgrimage site. Ten years ago, for the 110th anniversary of his burial, the tomb was beautifully restored and surrounded with a transparent fence to curb the otherwise sweet tradition of tomb kissing. Oscar Wilde was adored and admired, except for the five-year period from conviction to "eternity" when it was not appropriate to acknowledge him.

He died in Paris; in London he sparkled and created; in Oxford he studied; and he was born in Dublin and grew up there. It seems obvious and we are aware of it, but connections were not often drawn with the fact that he was Irish. He wrote in the "common" language, English; sometimes in French; he knew German fluently, he was fluent in Greek (creating his prison letter, without books at hand, he was unmistakably quoting fragments from memory) and was an international celebrity, "a citizen of all civilised capitals”. as Shaw called him. We rarely associate Wilde with the local context. However, let us listen to the writer himself; let us take his word for it. When in 1882 he travelled to America to lecture and dazzle - what did he say in his readings? Among other things, he talked about his own homeland, which, we have to remember, was not at that time on the maps of independent countries – just like Poland. When he had the opportunity, Oscar Wilde took the floor on his national cause, which sounds familiar to us. A prophet, one could say, and certainly - a son of his land. (This is what he called himself: “a most recalcitrant patriot”). He said in the United States: "We in Ireland are fighting for the principle of autonomy against empire, for independence against centralization”. “I do not wish to see the empire dismembered, but only to see the Irish people free” (see: Davis Coakley’s Oscar Wilde: The Importance of Being Irish).

Wilde was the son of his homeland, not only by birth, but - apparently - by conviction. No wonder - when you had a mother and a father such as his ... He was the son of his country and the son of great parents. His father William Wilde, an otolaryngologist known in the scientific world - the irony of fate caused his son Oscar to die because of a poorly performed ear surgery. That father was a passionate researcher and the voice of the Celtic tradition. His mother, Jane Francesca Wilde, née Elgee, who saw in her family name a link to Dante, née Alighieri! Mrs. William Wilde, aka Speranza, ran a literary salon at home, a very fashionable place in the city (Merrion Square, Dublin). There, even occasional visits were very much appreciated. She was its “leading lady”, the soul of the salon, the soul of life and the soul of the company. She was also the soul of the nation. She died when Oscar was already in prison. At her cemetery grave (not to be confused with a tombstone, which Jane does not have), we can see a tribute, by comparison to which Krakow's boast at the Rakowicki Cemetery pales: " Jane Francesca Lady Wilde, Speranza of ‘The Nation’, writer, translator, poet and nationalist, author of works on Irish folklore, early advocate of equality for women and founder of a leading literary salon”. "The Nation" was a weekly magazine and Speranza means "Hope" in Italian. Hope of the nation.

Jane Wilde raised her son to be a citizen and sensitized him to "matters and rights" - women's rights, children's rights, and more broadly: human rights, natural rights that clearly state that everyone is born equal and that everyone is born free. Oscar put his thoughts on the community into a well-known essay on The Soul of Man under Socialism. He understood politics in a unique way, very much in his own style, which means - artistically. Whatever he touched, he turned into a piece of art. When in De Profundis he testifies to his faith and his conversion, doubts arise as to whom he actually and to what he is converting: whether himself to believe in God or God into faith in art ... political credo: “When man is happy, he is in harmony with himself and his environment. The new Individualism, for whose service Socialism, whether it wills it or not, is working, will be a perfect harmony. It will be what the Greeks sought for, but could not, except in Thought, realise completely, because they had slaves, and fed them; it will be what the Renaissance sought for, but could not realise completely except in Art, because they had slaves, and starved them. It will be complete and through it each man will attain his perfection. The new Individualism is the new Hellenism” (The Soul of Man Under Socialism).

Now let's get down to earth and listen. Thanks to Wilde's letters published in the press (which are probably the only thing he signed with his name after leaving prison, apart from private correspondence), the penitentiary rules concerning minors in Great Britain were changed. Once there were no correctional facilities and the so-called difficult children ended up behind bars for their own improvement ... "Justices and magistrates, an entirely ignorant class as a rule, often remand children for a week, and then perhaps remit whatever sentence they are entitled to pass. They call this ‘not sending a child to prison’. It is, of course, a stupid view on their part. To a little child, whether he is in prison on remand or after conviction, is not a subtlety of social position he can comprehend. To him the horrible thing is to be there at all. In the eyes of humanity, it should be a horrible thing for him to be there at all. […] Of course no child under fourteen years of age should be sent to prison at all. It is an absurdity, and, like many absurdities, of absolutely tragic results. If, however, they are to be sent to prison, during the daytime they should be in a workshop or schoolroom with a warder. […] A resolution of the House of Commons could settle the treatment of children in half an hour. I hope you will use your influence to have this done. The way that children are treated at present is really an outrage on humanity and common sense. It comes from stupidity” (a letter of 27 May 1897 to the Editor of the ‘Daily Chronicle’. Wilde used his pen, and it had the power of to shake the audience, to win justice, though not for himself.

For Oscar Wilde the most important thing, no doubt, was art but let us get it right. The leading idea of aestheticism about 'art for art’s sake' does not mean that art is everything. Artistic creativity is governed, in Wilde's opinion, by laws other than everyday life, "dominates over life". However, daily life, which has no time or does not have the strength (or does not want) to express itself in works of art, the grey, ordinary life, requires something and deserves something too.

Oscar Wilde, the writer, contrary to easy associations, was not just an esthete. He had considerable non-artistic ambitions. "Had I remained in Ireland my career would have been a political one", he wrote about himself in a letter. He fought for human rights, including the most important ones that were taken from him: freedom.

Maciej Stroiński lectures at the Jagiellonian University, writes for "Przekrój". He is also a member of the Polish Literary Translators’ Association and translated Oscar Wilde's "De profundis" into Polish.

Covid-19 measures in place in Poland from 27 March [UPDATED]

Covid-19 measures in place in Poland from 27 March [UPDATED]

Covid-19 measures in Poland from 27 March until 9 April

Covid-19 measures in Poland from 20 March

Covid-19 measures in Poland from 20 March

Covid-19 measures in Poland from 15 March

Covid-19 measures in Poland from 15 March

Covid-19 measures in Poland from 13 March

Covid-19 measures in Poland from 13 March

Celebrating the creativity of Irish women

Celebrating the creativity of Irish women

Covid-19 measures in Poland from 27 February

Covid-19 measures in Poland from 27 February

Covid-19 measures in Poland from 12 February

Covid-19 measures in Poland from 12 February

Covid-19 measures in Poland from 1 February

Covid-19 measures in Poland from 1 February

Covid-19 measures in Poland from 28 December

Covid-19 measures in Poland from 28 December

The Anniversary of Polish Suffrage

The Anniversary of Polish Suffrage, 28 November 2020