Read more about this Initiative

Our engagement with the EU

Our membership of the European Union has helped to transform Ireland. We are committed to keeping our country at the heart of Europe by developing and strengthening our relationship with other EU member states and with the Institutions of the EU. 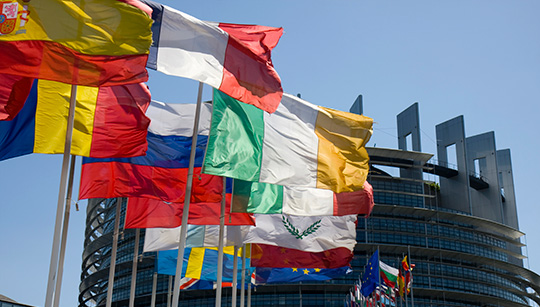 Our relationship with the EU

As a small country, we understand that an effective European Union is essential for us to achieve our goals, both at home and on the international stage.

So we are committed to enhancing our standing as a constructive partner in Europe. We do this by working through the EU to make an impact in international affairs that affect Ireland and by engaging on the full range of policy priorities in the Union to ensure that Ireland’s interests are being taken into consideration.

Benefits of the EU

Our Ministers, government officials and elected representatives at the European Parliament and the Oireachtas are involved in representing Ireland and our interests in the EU.

They work primarily through the EU’s Institutions to raise Ireland’s concerns with our partners and to influence EU policy.

Council of the European Union

Irish Government ministers regularly meet with their counterparts in the Council of the European Union (the Council of Ministers) to discuss policy developments in the Union and to help shape a response.

The Taoiseach meets with Heads of Government from the other 27 member states in the European Council to guide the EU’s upcoming work.

The Department of the Taoiseach is responsible for managing Ireland’s relationship with the EU. They work with us in the Department of Foreign Affairs and Trade, our network of Embassies and our Permanent Representation to the EU in Brussels.

The Minister of State for European Affairs, Helen McEntee, is responsible for dealing with EU issues and supports both the Taoiseach and the Minister for Foreign Affairs and Trade in their work.

Permanent Representation to the EU

Our Permanent Representation to the EU in Brussels represents Ireland’s interests in the EU on a day-to-day basis. It brings together civil servants from nearly every Irish government department, making it Ireland’s biggest diplomatic mission abroad.

The European Affairs Committee of the Oireachtas (the Irish parliament) plays a key role in informing debate on the European Union in Ireland by:

The Committee also regularly engages with EU institutions to monitor and influence the political and strategic direction of the Union as a whole.

Download PDF - History of Ireland's Accession to the EU

Read more about this Initiative