Irish Mission to the UN, Geneva

European Union and the UN

Careers at the UN

Membership of the United Nations has been central to Ireland’s foreign policy since we became a member in 1955. The principles and values enshrined in the UN Charter are those we have always sought to promote and protect, including in our current term as a member of the UN Security Council for 2021-2022.

The UN has a key role in addressing the challenges of today: climate change; global poverty; defending human rights; eliminating the threat posed by nuclear weapons; providing peacekeeping in conflict zones; promoting gender equality; and responding to humanitarian crises caused by natural disasters or conflicts. For more information on Ireland’s wider work across the UN please see our pages on our work on Peace and Security, Peacekeeping, International Development, and Human Rights.

Ireland holds the role of President of the United Nations Security Council for the month of September 2021.

During September, Ireland will manage the programme of Council business and chair the Council’s meetings. This is an important responsibility for Ireland and is the only time Ireland will hold the Presidency during our two-year term on the Security Council from 2021-2022.

Issues on the agenda of the Security Council in September include the evolving situation in Afghanistan, the UN-led peace process in Libya, the Council’s monthly meeting on the Middle East Peace Process, and the situations in Syria, in Yemen, in Sudan and in South Sudan.

In addition to these meetings, Ireland will host a number of meetings linked to key priorities for our term on the Council: on peacekeeping, on climate and security, and on the 25th anniversary of the Comprehensive Nuclear Test Ban Treaty.

In line with Ireland’s commitment to civil society engagement, we will bring civil society and grassroots voices to the Security Council table, particularly the voices of women peacebuilders.

Ireland on the UN Security Council

Ireland is an elected member of the UN Security Council for 2021-2022. We have been entrusted with a significant responsibility to help maintain and promote international peace and security. This is Ireland’s fourth term on the Council, having previously served in 1961, 1981-1982, and 2001-2002.

Under the UN Charter, the Security Council has the responsibility to determine the existence of a threat to peace or an act of aggression. It works to resolve disputes peacefully by investigating, mediating and appointing envoys. The Council can also impose economic sanctions or establish a peacekeeping operation to maintain or restore international peace and security. UN member states must comply with the resolutions of the Security Council.

The number of issues on the Council agenda has roughly tripled since Ireland last served on the UN Security Council.

A large proportion of the Council’s agenda is focused on Africa and the Middle East. These are longstanding priority areas for Ireland’s foreign policy.  We are engaging actively on these and all country situations during our term.

Read Ireland’s statements at meetings of the UN Security Council.

Elected Council members take on a number of leadership roles during their terms, including chairing Sanctions Committees and thematic Working Groups, and acting as primary drafters (Penholders) of some Security Council Resolutions.

Ireland has taken on a number of important leadership roles which reflect our foreign policy priorities and strengths. These are:

Ireland brings our principled, consistent and open approach to the work of the Council. We are working to play a constructive role, to find solutions and to overcome divisions where they exist on the Council.

Ireland’s tenure on the Council is guided by three principles:

These principles are at the heart of the Security Council’s mandate to maintain international peace and security.

Ireland is promoting sustainable, durable solutions to conflict, a key aspect of which is peacekeeping.

As a country with a longstanding and proud record of over 60 years continuous service on UN peacekeeping operations, Ireland is focused on helping shape the mandates under which UN peacekeepers serve.

Peacekeeping must be linked to peacebuilding to ensure continued and sustained support for countries emerging from conflict.

Ireland knows from experience that conflict resolution is a long and complex process, which requires consistent and determined commitment. Peace processes must include the voices of women, young people and civil society.

Ireland is working to strengthen the UN’s conflict prevention activities, including preventative diplomacy, mediation, non-proliferation, and disarmament. Cooperation between the UN and regional organisations is also vitally important in preventing conflict.

Conflict prevention must address the underlying drivers of conflict including insecurity, climate change, food insecurity, violations of human rights, poor governance, and the proliferation of small arms and light weapons.

The UN needs to deploy all its resources, including country teams, special representatives, political missions, and mediators, to intervene early; to highlight and stop human rights abuses; to prevent conflict; and to support the efforts of local stakeholders in peace-making and peacebuilding.

Ireland strongly promotes the rule of law and the upholding of human rights, in particular international humanitarian and human rights law. This includes prioritising the protection of civilians in conflict, ensuring humanitarian access to those in need of assistance and the fight against impunity.

Ireland is a firm supporter of the International Criminal Court, which has a unique and vital mission to ensure that those responsible for the most serious crimes of international concern cannot act with impunity.

Accountability also extends to ensuring respect for the resolutions of the Security Council.

The Security Council itself has a responsibility to prevent mass atrocity crimes. Ireland strongly supports the ACT Code of Conduct, which pledges Council members to act to prevent such crimes. 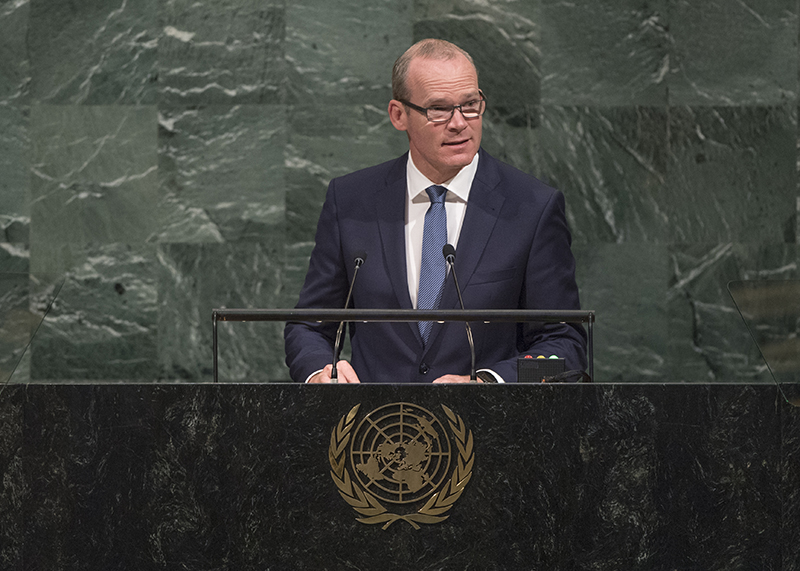 Irish Mission to the UN, Geneva

European Union and the UN

Careers at the UN