Civilian expert positions with the EU are advertised on www.publicjobs.ie 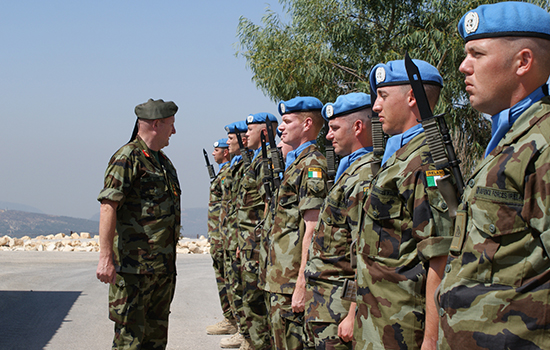 Ireland has a proud tradition of participation in UN and UN-supported peacekeeping missions, both civilian and military. Ireland is proud of being the only nation to have a continuous presence on UN and UN-mandated peace support operations since 1958, with Irish peacekeepers highly respected internationally.

The Government decides on a case-by-case basis whether, when and how to commit Defence Forces personnel to peacekeeping operations. The ‘triple lock’ of UN authorisation, Government approval, and Dáil approval must be satisfied before the Defence Forces can deploy.

Our largest deployment currently is with the UN peacekeeping mission in Lebanon (UNIFIL). We also have Defence Forces troops deployed in the Golan Heights, Syria, Israel, Jordan, Bosnia & Herzegovina, Kosovo, Western Sahara, Mali and the Democratic Republic of Congo. Since 1978, a number of Defence Forces officers have also served in different positions at UNHQ, New York where we currently provide two officers to the UN's Department of Peace Keeping Operations (DPKO).

In the past 15 years members of the Defence Forces have served with a number of missions which have been authorised by the UN and led by the EU or NATO. Senior appointments held by Irish Officers are symbolic of the professionalism of the Irish Defence Forces and the high regard they continue to be held in:

Read more about the involvement of our Defence Forces in overseas missions.

We are also increasingly involved in civilian peacekeeping. Strong civil institutions play an important role in preventing conflict from starting or reoccurring, and civilian peace operations help fragile states to rebuild institutions so they have the capacity to provide for the local population. These operations can have short-term aims to improve peace and security, as well as longer-term objectives such as:

A range of expertise is required in these missions, in the areas of policing, customs, rule of law, and human rights. Irish experts in these fields are currently deployed in the following missions:

An Garda Síochána have also proudly contributed to both EU and UN civilian missions since 1989, when members were deployed to UNTAG, the UN Transition Assistance Group Mission in Namibia. Gardaí are currently serving in Cyprus with UNFICYP, and in Kosovo with EULEX Kosovo.

Are you interested in applying for a seconded position as a civilian expert with the EU’s Common Security and Defence Policy missions?

Positions are advertised as they arise on www.publicjobs.ie. Alternatively, you can be placed on our mailing list for new positions by contacting us.

Civilian expert positions with the EU are advertised on www.publicjobs.ie