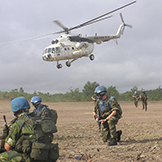 About the work of the Irish Defence Forces

The EU’s Common Security and Defence Policy (CSDP) provides the EU with the capacity to undertake peacekeeping and conflict prevention missions and to strengthen international security in accordance with the principles of the UN Charter.

During the course of the evolution of the EU’s CSDP, our EU partners have always fully respected Ireland’s sovereignty, independence and neutrality. The legal guarantees given by the European Council in June 2009 confirmed that the EU’s security and defence policy does not affect or prejudice Ireland’s traditional policy of military neutrality. The deployment of contingents of more than twelve Irish troops to any conflict zone or CSDP mission cannot proceed without what we call the ‘triple lock’ of UN authorisation, Government approval, and Dáil approval.

CSDP is a fundamental part of the EU’s Common Foreign and Security Policy (CFSP). Read more about the CFSP, and other EU External Policies.

The EU’s civilian and military missions go hand-in-hand with political, economic, diplomatic and development activity. The Union is involved in peacekeeping, crisis management and reconstruction efforts in conflict affected regions across the world.

The Irish Defence Forces have participated in many EU military operations. The value the EU places on the type of capacity and experience which we bring to peacekeeping operations was reflected in the appointments of senior Irish officers as Operational Commander of EUFOR Chad in 2007 and Mission Commander of EUTM Somalia in 2011 and 2013. Defence Forces personnel are currently deployed to EU missions in Mali, Bosnia and Herzegovina and the EU naval mission in the Mediterranean, Operation IRINI in addition to Ireland’s UN peacekeeping commitments.

Irish experts are also seconded to various EU civilian missions by the Department of Foreign Affairs; Irish civilians are currently serving in Niger, Somalia, Kosovo, Georgia, Iraq, and Ukraine. Deployments to missions in Libya and the Central African Republic are forthcoming. Members of An Garda Síochána also serve in the EU Rule of Law Mission in Kosovo (EULEX Kosovo).

In 2019 Ireland published our National Implementation Plan for the Civilian CSDP Compact. The Compact will make Civilian CSDP more capable, flexible and responsive to the needs of our external partners.

Our involvement in CSDP missions allows us greater opportunities to contribute to the strengthening of international peace and security, to protect human rights and fundamental freedoms, and to support conditions for sustainable development. To this end, Ireland contributes to EU Battlegroups, which are a specific form of the EU’s rapid response elements and one possible answer to the timely provision of the necessary capabilities for an EU rapid response operation. Ireland’s most recent Battlegroup participation was with the German led EUBG 2020-2. To date, EU Battlegroups have not been deployed to the field.

The EU Global Strategy (EUGS) sets out a clear vision for EU CFSP and CSDP missions. As part of the EUGS, Ireland engages in Permanent Structured Cooperation (PESCO) on security and defence. This initiative enhances coordination, reduces duplication of effort and increases cooperation in the development of EU common security capabilities.

Are you interested in applying for a seconded position as a civilian expert with the EU’s Common Security and Defence Policy missions?

Positions are advertised as they arise on www.publicjobs.ie. Alternatively, you can be placed on our mailing list for new positions by contacting us.

About the work of the Irish Defence Forces