Organization for Security and Co-operation in Europe (OSCE) homepage

View photos of Ireland's Chairmanship of the OSCE

The Organisation for Security and Cooperation in Europe (OSCE) is the world’s largest regional security organisation, made up of 57 participating States from Europe, Central Asia and North America. Ireland chaired the OSCE for the first time in 2012.

What is the OSCE?

The OSCE is an intergovernmental regional security organisation. Ireland was an original participant in 1973 in the Conference on Security and Cooperation in Europe (CSCE), which became the OSCE in 1994. The OSCE is made up of 57 participating States, from Europe, Central Asia and North America, together with 11 partner countries. The Organisation has a comprehensive and co-operative concept of security, where the protection of human rights and economic and environmental governance is as important as politico-military co-operation.

The OSCE deals with a wide range of issues, including arms control, preventive diplomacy, confidence-and security-building measures, election monitoring, human rights and economic and environmental security. It has a network of 16 field operations in the Balkans, Eastern Europe and Central Asia.

In 2012, Ireland assumed the Chairmanship of the OSCE for the first time. As Chairperson-in-Office, the Tánaiste was responsible for the executive action of the organisation and the co-ordination of its activities.  From the outset, Ireland’s objectives were to ensure balance and coherence across the three main policy areas of the OSCE, namely its politico-military, economic and environmental and human dimensions.

The overarching goal was to strengthen security across all dimensions and to enhance the Organisation’s capacity to fulfil its fundamental objectives.

Within the human dimension (human rights and fundamental freedoms) freedom of the media was a particular priority, with a focus on digital media and internet freedom. A Chairmanship conference on internet Freedom took place at Dublin Castle. The aim of that conference was to move towards a clearer understanding of existing OSCE commitments regarding the rights to freedom of expression and freedom of the media, and their application to the Internet. 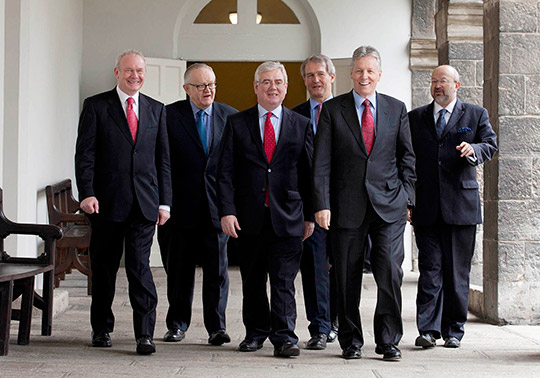 In the politico-military dimension, Ireland sought to make progress on updating confidence-and security-building measures and enhancing the conflict prevention capacity of the organisation. Drawing on Irish conflict resolution expertise in order to facilitate efforts to resolve protracted conflicts was also a priority. A conference took place on 27 April, focusing on Northern Ireland as a case study, aiming to draw on common themes applicable to conflict situations in the OSCE area.

The opening session examined the political process which led to the Good Friday Agreement of 1998 and the processes and institutions which have sustained it. The high-level speakers were Tánaiste Eamon Gilmore; First Minister of the Northern Ireland Executive Peter Robinson; Deputy First Minister of the Northern Ireland Executive Martin McGuinness; and then Secretary of State for Northern Ireland Owen Paterson. The Secretary General of the OSCE, Lamberto Zannier, also spoke during the opening session.

The culminating event of the Chairmanship year was the OSCE Ministerial Council, which was hosted by the Tánaiste at the RDS from 6-7 December.  This was the largest ever Ministerial meeting to take place in Ireland.  It was attended by over fifty Ministers, including the then US Secretary of State, Hilary Clinton, Russian Foreign Minister, Sergei Lavrov, British Foreign Secretary William Hague and the EU’s High Representative, Catherine Ashton.

Ireland remained in the OSCE Troika for 2013. Switzerland is the current 2014 Chair 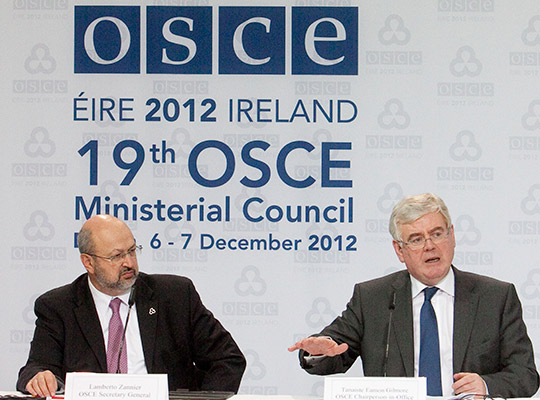 Organization for Security and Co-operation in Europe (OSCE) homepage

View photos of Ireland's Chairmanship of the OSCE