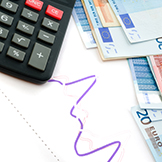 Each year our Appropriation Account is published in the Annual Report of the Comptroller and Auditor General and considered by the Public Accounts Committee of the Oireachtas.

How we spend your money

The Department also has a capital allocation (essentially used for ICT and the Passport Reform Programme as well as the cost of maintaining State properties overseas) of €6 million in 2016.

The Department’s gross expenditure in 2016 is projected to be €698.4 million.

The programmes that we implement are as follows:

Work under this programme includes the effective delivery of passport and consular services for our citizens; supporting our emigrants and deepening engagement with our diaspora; sustaining peace and enhancing reconciliation and political progress in Northern Ireland; increasing North South and British-Irish cooperation; and promoting our culture, arts and creative industries through the Embassy network.

To work for a fairer, more just, secure and sustainable world (“Our Values”)

This Programme covers the Department’s contribution towards a more just world through the promotion and protection of human rights internationally and a more secure world based on a stable and secure rules-based international environment. Over 70% of current expenditure under this programme is made up of contributions to international organisations.

The Department’s work under this programme has been supporting Ireland’s economic recovery through effective contribution to job creation, exports, inward investment and tourism and education in Ireland and through building and maintaining strong bilateral relations to promote our economic interests abroad.

Programme D provides the framework for the Department’s role in securing Ireland’s influence in EU outcomes through maintaining and growing strong relationships with the EU institutions and other Member States. The programme equally supports Ireland’s contribution to the EU’s global engagement on peace, security, trade and development, as well as security in the wider European region.

Programme E is a new programme for 2016 and highlights the emphasis that we are placing on driving and supporting Public Service Reform and Civil Service Renewal by strengthening our corporate governance, and reviewing and upgrading key corporate processes and procedures.

The allocation in 2016 for this programme is €41 million.

Work on Poverty and Hunger Reduction

This Programme contributes towards the eradication of extreme global poverty and hunger, while helping to build resilience and sustainable livelihoods for some of the world’s poorest, most vulnerable and marginalised communities with a particular focus on Sub-Saharan Africa.

The programme enables Ireland to play a leading role in the comprehensive international response to the current unprecedented levels of humanitarian crisis, providing emergency humanitarian assistance to meet the acute needs of vulnerable populations caught up in the crises in the Middle East and Sub-Saharan Africa.

The allocation in 2016 for this programme is €486.4 million. For 2016, the Government has provided a gross allocation to Official Development Assistance (ODA) of €641 million. In addition to the €486.4 million administered by the Department under Vote 27 – International Cooperation, a further €155 million is allocated through other Government Departments and Ireland’s share allocation of the EU Development Cooperation Budget.

As well as expenditure to support our programmes, the Department also receives funds from various sources. The biggest source of funding in the Department comes from the Passport Service (over €41 million estimated for 2016). In 2016, the total receipts in the Department (known as Appropriations in Aid) are estimated at €45 million.

More detail on each of the programmes can be found in the Department's Statement of Strategy 2017-2020.

More detail on the outputs and output targets for each programme is contained in the Revised Estimates for Public Services, published annually by the Department of Public Expenditure and Reform.

Each year our Appropriation Account is published in the Annual Report of the Comptroller and Auditor General and considered by the Public Accounts Committee of the Oireachtas.