We aim to promote growth and jobs at home by co-operating closely with the state agencies to promote Irish trade, tourism and inward investment. 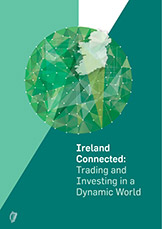 Ireland Connected: Trading and Investing in a Dynamic World (PDF) 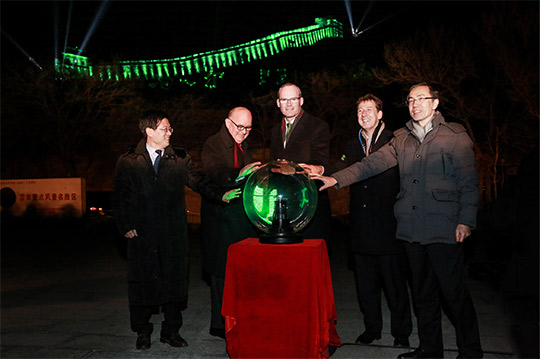 The advancement of Ireland’s prosperity by promoting our economic interests internationally is one of the five High Level Goals identified in the Department’s Statement of Strategy, 2017 – 2020. Under the goal of “Our Prosperity” the Department aims to achieve three main outcomes:

The Government’s trade strategy Ireland Connected: Trading and Investing in a Dynamic World endorses a Team Ireland approach to markets, where the Embassy and State Agency overseas network work together to promote trade, tourism and investment.

While the trade activities of Embassies and Consulates vary from market to market, core activities include:

The Government’s trade strategy, Ireland Connected: Trading and Investing in a Dynamic World was launched on 8 March 2017 and is the result of close collaboration between the Department of Foreign Affairs and Trade and the Department of Business, Enterprise and Innovation. It is the successor strategy to Trading and Investing in a Smart Economy, which covered the period 2010 to 2015.

The strategy sets ambitious targets for Ireland’s exports, foreign direct investment, tourism and international education with a focus on intensifying activities in markets where Ireland already has a strong trading relationship, and on diversifying to others. The objective is to build resilience in our enterprise base, to position Ireland for further growth and to create sustainable jobs and a higher standard of living for Irish citizens.

Key outputs to date include:

The Export Trade Council (ETC) was established in 2011 to strengthen cooperation and coordination across all Government Departments and State agencies involved in the promotion and development of trade, tourism and investment, and the private sector. The Council is chaired by the Tánaiste and Minister for Foreign Affairs and Trade, and its membership includes the Minister for Business, Enterprise and Innovation; the Minister for Agriculture, Food and the Marine; the Minister for Transport, Tourism and Sport; and the Minister for Education and Skills.

Other relevant Departments are represented at senior official level, while the CEOs of IDA Ireland, Enterprise Ireland, Bord Bia, Science Foundation Ireland, and Tourism Ireland are also members. The private sector is represented on the Council by IBEC and the Irish Exporters Association, as well as by a number of business people with a track record in relevant sectors.

The ETC generally meets at plenary level twice a year. The agenda and minutes of the most recent meeting can be found here.

Ireland has separate Joint Economic Commissions with China, the Republic of Korea, Saudi Arabia and Russia. Meetings are facilitated by the Department aim to increase trade and investment and to develop economic, business, scientific and technological co-operation. They are usually held every two years.

We aim to promote growth and jobs at home by co-operating closely with the state agencies to promote Irish trade, tourism and inward investment.

Ireland Connected: Trading and Investing in a Dynamic World (PDF)