Take a look at The Peace Process timeline

The Northern Ireland peace process brought about an end to decades of conflict. The Irish Government played a central role in this process and our work continues today. 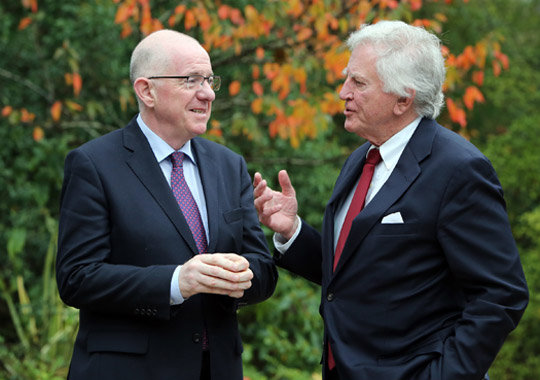 Political division in Ireland, which has its origins in the various Plantations by English and Scottish settlers, and particularly the Plantation of Ulster, was consolidated geographically with the Anglo-Irish Treaty, which was signed in 1921. This divided the island of Ireland into two separate entities, with Northern Ireland remaining a part of the United Kingdom. From 1921 to 1972, Northern Ireland had its own devolved Government, separate from the Parliament in Westminster.

However, this Government was controlled by the Unionist majority in Northern Ireland and Nationalists suffered discrimination, both politically, through the gerrymandering of electoral districts, and also in the jobs market and the allocation of public housing. In 1969, heavy-handed policing of peaceful civil rights campaigners led to civil unrest and a revival of paramilitary organisations.

Following more than a decade of violence, in the early 1980s, the Irish and British Governments began working closer together to find a political settlement that would be acceptable to the whole community in Northern Ireland.

This resulted in the Anglo-Irish Agreement, which was signed by both Governments in November 1985. It allowed the Irish Government to put forward views and proposals on Northern Ireland affairs.

It also put in place structures to help the two Governments work towards finding a lasting solution to the conflict.

In 1993, the two Governments issued a Joint Declaration, which set out a charter for peace and reconciliation in Ireland.

It established the principles of self-determination and consent in relation to the Constitutional status of Northern Ireland. This meant that it was up to the people of Northern Ireland to decide on the future status and this could not be imposed from the outside. The Declaration also gave those associated with paramilitary violence a route into the political process.

The IRA and Loyalist paramilitaries announced a ceasefire in 1994. In December 1995, an international body was set up under the chairmanship of US Senator George Mitchell to independently assess the decommissioning of paramilitary arms. This body reported on progress in 1996.

However, in February 1996, the IRA ended its ceasefire and resumed violence.

Multi-party talks began in 1996, chaired by Senator Mitchell and involving the Irish and British Governments and all the parties elected in Northern Ireland. Sinn Fein was excluded until 1997, when the IRA announced a further ceasefire.

These talks resulted in the Good Friday Agreement in April 1998

Our Reconciliation Fund supports community groups and voluntary organisations working to build peace in Northern Ireland and improve relations between North and South and between Ireland and Britain.

Take a look at The Peace Process timeline