Ireland and Women, Peace and Security on the International Level

Ireland at the UN Security Council

Ireland was elected to serve a two-year term on the UN Security Council and took up this seat in January 2021. Ireland’s tenure on the Security Council will be guided by three principles: Building Peace; Strengthening Conflict Prevention; and Ensuring Accountability.

Central to this ambition is advancing the WPS Agenda, which is a key priority for Ireland’s engagement with all files on the Security Council. Ireland is a leading voice on WPS at the Security Council and stewards the Agenda through its role as Co-chair of the Informal Expert Group on WPS (alongside Mexico).

Ireland at the European Union

Ireland has been active in promoting the WPS Agenda within the European Union, including through engagement with the EU Action Plan for WPS and the EU Gender Action Plan III. Ireland seeks to mainstream gender and gender equality throughout all of our work at the EU, ensuring the inclusion and strengthening of gender perspectives at all fora.

WPS at the Security Council

Women Peace and Security at the Security Council

Ireland has been a longstanding champion of the Women, Peace and Security agenda at the UN, and it is a key priority for our two-year membership of the Security Council.

On top of our role as co-chairs with Mexico of the Informal Expert Group – a working group of the Security Council – on Women, Peace and Security, we are also seeking to advance the WPS agenda more broadly across all our work on the Security Council – including on country, thematic and peacekeeping files – as well as through ongoing engagement with civil society.

We aim to demonstrate how women can be agents of change in conflict and post conflict settings, by bringing those women to the table. In short, our aim will be to embed gender perspectives right across our Council activities. 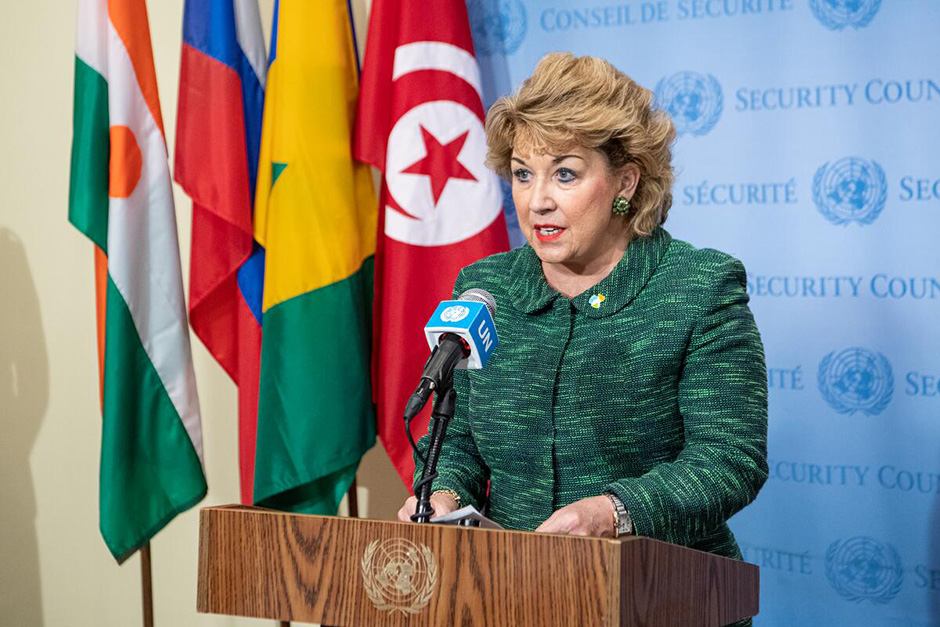 The Informal Expert Group (IEG) on WPS was established in 2016 to facilitate a more systematic approach to WPS within the work of the Security Council and enable greater oversight and coordination of implementation efforts.

Ireland is honoured that, together with Mexico, it co-chairs the IEG. This role allows for close engagement with senior leadership of UN missions in monitoring action to implement the WPS Agenda on the ground, and facilitating the enhanced flow of information and analysis to the Security Council.

A summary of each IEG meeting and its recommendations are sent as an annex to a letter to the UN Secretary-General and published as official documents of the Security Council.

Find all speeches and statements from Ireland at the UN Security Council on the Permenant Mission of Ireland to the United Nations' website.

Ireland has long argued that in order to fully address the question of how to increase women’s participation in peacekeeping, there needs to be a move beyond numbers and quantitative targets. This why in the first half of 2021, Ireland, along with Germany, Namibia, South Africa, Bangladesh, Kenya, Indonesia, and Canada, initiated three panel discussions exploring the structural and institutional barriers to the full participation of women in peacekeeping and the means by which they might be addressed.

The first event focussed on barriers to women peacekeepers in the field, the second event on barriers at the national level, and the third related to the potential for progress on this issue in the new era of Action for Peacekeeping Plus.

The aim of the series was to draw on the insights of civil society, UN representatives, Member States and women peacekeepers themselves in order to look at what action could be taken. As a result, an outcome document which highlights six concrete, actionable recommendations was developed. On July 8 2021, Minister Coveney and representatives from the series co-sponsors handed over the document and its recommendations to Under Secretary General of the Department of Peacekeeping Operations, Jean-Pierre Lacroix.