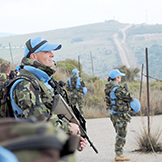 Learn more about Ireland’s relationship with the UN

We aim to ensure Ireland’s values are reflected in the international community’s approach to security, conflict prevention and crisis management

Ireland is committed to playing a positive and constructive role in the maintenance of international peace and security. Our policy in this area is grounded in the UN Charter and the principle that the UN Security Council has the primary role in maintaining global peace and security.

Our EU and international partners have always fully respected Ireland’s sovereignty, independence and neutrality. The legal guarantees given by the European Council in June 2009 confirmed that the EU’s security and defence policy does not affect or prejudice Ireland’s traditional policy of military neutrality. Irish troops will not be deployed to any conflict zone, UN Peacekeeping or CSDP mission, without what we call the ‘triple lock’ of, UN authorisation, Government approval, and Dáil approval.

The EU’s Common Security and Defence Policy (CSDP) has evolved as a central part of the EU’s Common Foreign and Security Policy (CFSP). CSDP is just one element within the EU’s comprehensive approach to crisis management, and includes both civilian and military capabilities and operations. Our International Security Policy Section is involved in the development of the CSDP and, in close coordination with the Department of Defence, we contribute to policy discussions which take place in Brussels. We also send civilian and military experts to CSDP missions overseas.

The EU Global Strategy (EUGS) sets out a clear vision for the CFSP by committing the EU to promote peace, prosperity, democracy and the rule of law. Adopted in 2016, this Strategy sets out the EU’s core interests and principles for engaging in the world, and helps explain what the EU stands for and hopes to achieve. As part of the EUGS, it is Ireland’s intent to engage in Permanent Structured Cooperation (PESCO) on security and defence. This initiative will enhance coordination, reduce duplication of effort and increase cooperation in the development of EU common security capabilities for deployment on UN-mandated or supported peacekeeping operations.

Ireland became a member of the United Nations in 1955. Since 1958, Ireland is proud of its tradition of being the only nation to have a continuous presence on UN and UN-mandated peace support operations, mainly in the Middle East. However, in recent years, following the end of the cold war, Irish personnel have also found themselves in many other parts of the globe as peacekeepers.

The operational experience gained continues to form a solid foundation from which to face the challenges posed by the changing nature of international conflict prevention and crisis management. In recent years, the international community has recognised the need for a more comprehensive approach to tackling the root causes of conflict, and has prioritised building and restoring political, economic and legal institutions. Consequently, civilian crisis management missions are playing a valuable role in preventing conflict from starting or reoccurring.

In support of this, we are directly involved in sending Irish citizens with expertise in a range of areas including human rights, justice and rule of law to participate in EU civilianmissions in Libya, Mali, Niger, Somalia, Kosovo, Georgia, Ukraine and the Palestinian Territories. We also support the deployment of members of An Garda Síochána, currently deployed in UN and EU missions in Cyprus and Kosovo.

The Department of Foreign Affairs and Trade also manages Ireland’s participation in the Euro-Atlantic Partnership Council and NATO’s Partnership for Peace framework (PfP) in coordination with the Department of Defence. The PfP is a programme of practical bilateral cooperation between individual Euro-Atlantic partner countries and NATO. It allows partners to build up an individual relationship with NATO, choosing their own priorities for cooperation. Ireland has been a member of PfP since 1999.

Learn more about Ireland’s relationship with the UN