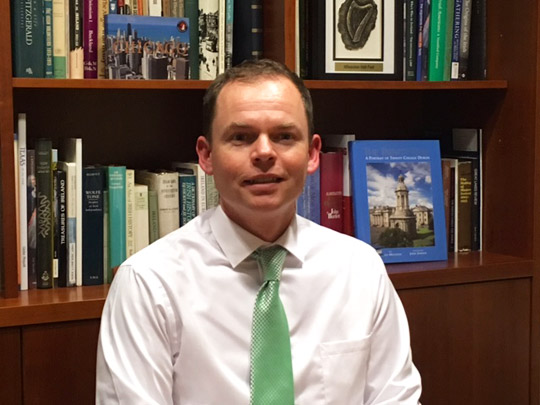 I am delighted to have taken up duty as Ireland’s Consul General here in Chicago and welcome you to the website of the Consulate General. I hope you will find the information here to be useful and informative. In addition to providing information on the services provided by the Consulate such as applying for Irish passports and visas, it is also a source of information on Ireland and, of course, on the many links between Ireland and the United States.

Consul General Brian O'Brien was appointed Consul General of Ireland to the Midwestern United States in December 2016. He is Ireland's 22nd Consul to the region, since the office opened in 1933.

Brian is from Dromore, County Tyrone. He is from a farming background. He was educated at Drumlish Primary School and the Christian Brothers School, Omagh.

Brian completed a Law Degree (LLB) in Manchester, England in 2001. After graduation, he spent two years teaching in the Japanese High School system in Shizuoka prefecture Japan on the Japan Exchange and Teaching (JET) programme.

Brian joined HSBC bank's graduate programme in 2004 and worked in various locations including London and Istanbul. He also completed a degree in Financial Services while working for HSBC.

Brian joined the Department of Foreign Affairs and Trade in 2006. He was part of the team that established a bilateral cooperation programme and set up Ireland's first Embassy to Malawi in East Africa (2007-2012). He also served in Ireland's Embassy to New Delhi, India (2010-2012) which was also accredited to Nepal, Sri Lanka and Bangladesh.

Brian has had a number of roles in DFAT Headquarters including working on UN issues, Human Rights and Trade. Prior to assuming post in Chicago, Brian was deputy Director of the Asia Pacific unit in Dublin.

From his base in Chicago – a city with a strong Irish heritage - Brian along with the Consulate team will be working to promote Ireland, Irish culture and Irish interests in the region and to foster the long standing historical links between Ireland and the Midwest.

Outside of work, Brian enjoys hiking, cycling and the outdoors. He is a keen surfer and snowboarder. He also enjoys Irish music and dance.