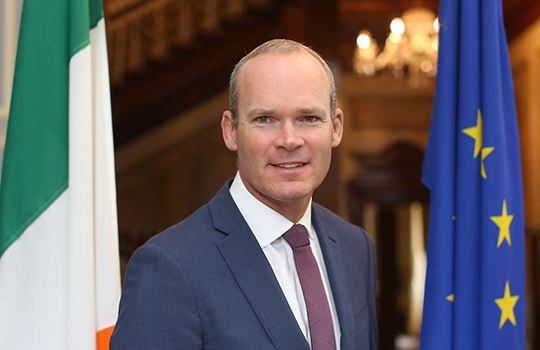 Appointed Tánaiste and Minister for Foreign Affairs and Trade with responsibility for Brexit on 30 November 2017.

Appointed Minister for Foreign Affairs and Trade with responsibility for Brexit on 14 June 2017.

Appointed Minister for Housing, Planning and Local Government on May 6th 2016.

Appointed as Minister for Agriculture, Food and Marine on March 9th 2011 and Minister for Defence on July 11th 2014.

Elected to the Dáil (Irish Parliament) in 1998 as one of Fine Gael’s youngest TD’s. Since then, he has held shadow ministries in the following areas: Drugs and Youth Affairs; Communications, Marine and Natural Resources; Transport and the Marine.

Elected to the European Parliament in 2004 and was a member of the EPP-ED group. He was a member of the Foreign Affairs Committee and the Internal Market and Consumer Protection Committee. He was also a substitute member on the Fisheries Committee. Mr. Coveney was the author of the European Parliament's Annual Report on Human Rights in the World for the year 2004 and again for 2006.

Member of Cork County Council and the Southern Health Board from 1999 to 2003.

A keen fan of all competitive sport, he played rugby for Garryowen, Cork Constitution and Crosshaven Rugby Club. In 1997/8 he led the "Sail Chernobyl Project" which involved sailing 30,000 miles around the world for charity.

Mr. Coveney continues to be involved in the running of a family farm in County Cork.