Ireland’s priorities at the OSCE and the Mission’s role

Ireland was a founder member of the OSCE and sees it as a vital element of European security. The then Taoiseach Liam Cosgrave signed the Final Act for Ireland in 1975. The OSCE’s comprehensive concept of security, its activities in the area of human rights and its role as a regional arrangement under Chapter VIII of the UN Charter, in helping to prevent, contain and resolve conflict, are valued by Ireland.

Ireland expresses its positions in the framework of statements on behalf of the European Union which are co-ordinated and drafted on a weekly basis by the OSCE delegations of EU member states in Vienna.

Ireland’s Priorities at the OSCE

Ireland’s priorities at the OSCE coincide with those of the EU. In addition it attaches significant weight to strengthening and safeguarding the work of the OSCE in the Human Dimension. Other priority areas for Ireland at the OSCE include promoting the implementation of UN Security Council Resolution 1325 on Women, Peace and Security, good governance, mediation and the Helsinki+40 process.

The Role of the Irish Mission

Members of the Irish Delegation monitor and actively participate in the work of the OSCE’s various committees, as well as the activities of the Secretariat and the various OSCE Institutions. The Mission acts as a liaison between the OSCE Institutions and participating States and the Irish national authorities. The Mission represents the governments’ position in multilateral negotiations on all OSCE matters and, in turn, highlights where OSCE recommendations and commitments are to be implemented. 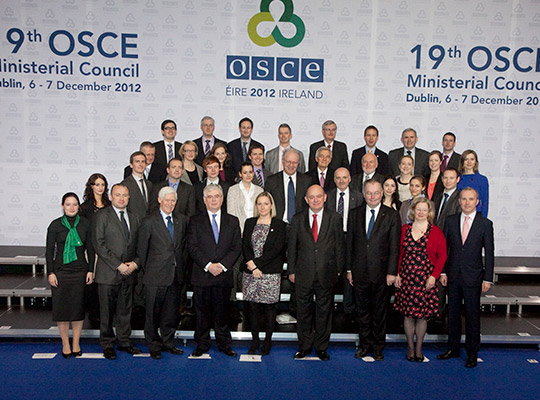 Irish Staff in the OSCE

Irish Chairmanship of the OSCE 2012

In 2012, Ireland assumed the Chairmanship of the OSCE for the first time. As Chairperson-in-Office, then Tánaiste Eamon Gilmore was responsible for the executive action of the organisation and the co-ordination of its activities. From the outset, Ireland’s objectives were to ensure balance and coherence across the three dimensions of the OSCE. The overarching goal was to strengthen security across all dimensions and to enhance the Organisation’s capacity to fulfil its fundamental objectives.

Achievements of the Irish OSCE Chairmanship include reaching an agreement on the Helsinki +40 process, a strategic roadmap for reflection on the work of the OSCE, to be undertaken between now and 2015. Other significant agreements included a joint statement on the Transnistrian settlement process, a declaration on strengthening good governance and a decision on transnational threats.

At the Ministerial Council in Dublin in 2012 a decision was made to launch the Helsinki+40 process regarding the OSCE’s future direction. The process runs until the end of 2015. Ireland sees Helsinki +40 as an opportunity to strengthen the OSCE’s role based on agreed principles and commitments and a broad concept of security.