The Malaysian Irish Alumni Association organised its MIAA Shamrock Run 2017 on Sunday, 7 May 2017 at the DPulze Shopping Center, Cyberjaya, Selangor.

This is the third Shamrock Run since its inception in 2014. It is a non-competitive leisurely run to instill health awareness and promote bonding for families and friends.  Each runner will be given an event T-shirt, running bib and a unique collectors’ finisher medal, with interesting design and motives. Prizes will be given to best dressed runners in Shamrock, Irish and Malaysian motives. 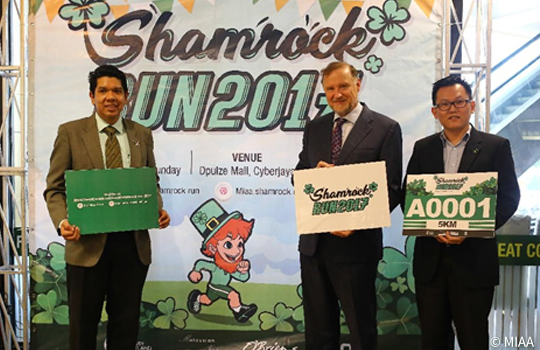 The soft launch of Shamrock Run 2017 was graced by His Excellency Eamon Hickey, the Ambassador of Ireland to Malaysia, reaffirming the strong support of the Irish Embassy and the Irish Department of Foreign Affairs and Trade.  Also present at the launch was Managing Director of O’Brien’s Irish Sandwich Café Malaysia, Brian Pua and Hafidz Zihim, the President of the Malaysian Irish Alumni Association.

In his speech, the Ambassador said that Shamrock Run brings the relationship between Malaysia and Ireland to a higher level, in that it enhances the people to people relationship between two countries.  Furthermore, the cultural and identities of both nations can be appreciated better through further exposure of each other’s cultures.

There are 2 categories of the run, the 10km Men & Women Open for those aged 12 and above (Flag Off 7.30 am) and 5km Family Fun Open Category (for those aged 5 and above), strollers and children are much welcomed (Flag Off 7.35 am). The route of the route will pass leafy surroundings suburban of Cyberjaya.

The Shamrock Run 2017 is organized by the Malaysian Irish Alumni Association with strong collaboration from the Embassy of Ireland in Malaysia and O’Brien’s Irish Sandwich Café as the main partner.