Shamrock Run Malaysia 2016 organised by the Malaysian Irish Alumni Association (MIAA) in collaboration with the Embassy of Ireland in Malaysia and O'Briens Sandwich Cafe held at Putrajaya Botanical Gardens on 27 February 2016. 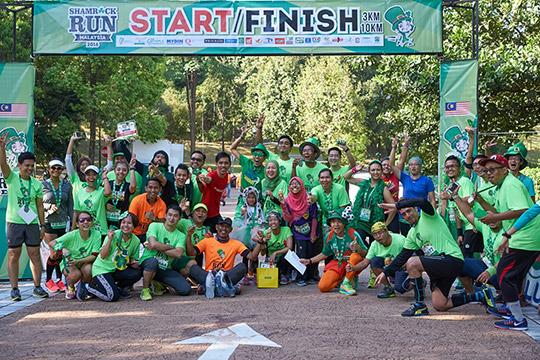 To kick start the celebration for the upcoming St Patrick's Day on 17 March, the Malaysian Irish Alumni Association (MIAA) in collaboration with the Embassy of Ireland in Malaysia and O'Briens Irish Sandwich Café organised the MIAA Shamrock Run at Putrajaya Botanical Gardens on 27 February 2016.

The MIAA Shamrock Run was held to celebrate the friendship and strong relationship between the people of Malaysia and Ireland and was flagged off by the Ambassador of Ireland to Malaysia, His Excellency Eamon Hickey.

The run was divided into 2 categories, the 10km Run and 3km Run and the route took runners into the leafy landscaped vicinity of the Putrajaya Botanical Gardens. According to the President of MIAA, Hafidz Kosai Mohd Zihim, the MIAA Shamrock Run 2016 is in its second year and has received tremendous response with 1,500 participants.

The Ambassador gave a short speech at the culmination of the Run stating that the event is a great platform to highlight the relationship for both countries and that he was proud to see the Malaysian Shamrock Run being organised successfully. He added that there are many other SHamrock Runs around the world taking place around this time to celebrate St. Patrick's Day.

The speech was followed by a prize-giving ceremony, where 40 runners in costumes embodying Malaysian and Irish cultures were given Best Dressed awards while 80 runners collected lucky draw prizes. All finishing runners received a participation medal, a free t-shirt as well as other goodies.

The success of Shamrock Run Malaysia 2016 is a positive display of Irish presence in the local community and it is hoped that future events will further highlight Ireland's connection to Malaysia.