The Embassy works with a number of Irish state agencies to: 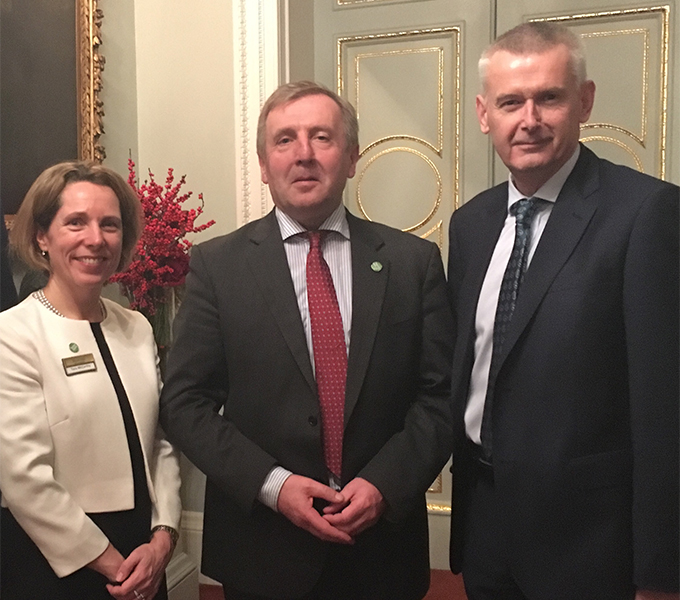 Working with state agencies in Britain

The Embassy of Ireland in Great Britain works closely with Irish state agencies to promote trade, tourism and inward investment. The Ambassador chairs the local market team. We can:

Working with the right expertise in relevant state agencies is part of our successful strategy.

The Irish Food Board, known as Bord Bia, acts as a link between Irish food, drink and horticulture suppliers and existing and potential customers throughout the world. Bord Bia has a network of overseas offices including here in London.

Enterprise Ireland (EI) is the government organisation responsible for developing and growing Irish enterprises in world markets. With an office here in London, it also has a network of nine regional offices throughout Ireland and over 30 international locations.

Tourism Ireland markets the island of Ireland as a holiday destination overseas. It devises and implements world-class marketing programmes and provides industry partners with opportunities to market their own products and services alongside Tourism Ireland overseas. They have offices in London and Glasgow.

Science Foundation Ireland (SFI) invests in academic research that is most likely to generate new knowledge, leading-edge technologies and competitive enterprises in science and engineering. As well as promoting Ireland’s achievements around the world, SFI supports co-operation between education, government, and industry.

Consulate General of Ireland to Scotland

The Consulate General of Ireland to Scotland provides valuable services to Irish Citizens living in Scotland and, like the Embassy, works hard to ensure the promotion of Ireland interests in Great Britain.

Consulate General of Ireland to Wales

The Consulate General of Ireland in Wales is now open. The Consulate will have a governmental and economic focus and will play an important role in supporting the strengthening and deepening of the existing relationships between Ireland and Wales.

Connecting with our diaspora

Connecting with the Irish diaspora, including those interested in the Irish connection for enhancing business networks or promoting and maintaining Irish culture in their communities, is a major part of our work, in supporting the Irish in Britain. We’re committed to recognising the efforts of the Irish Community in Britain by engaging with them both practically and strategically.