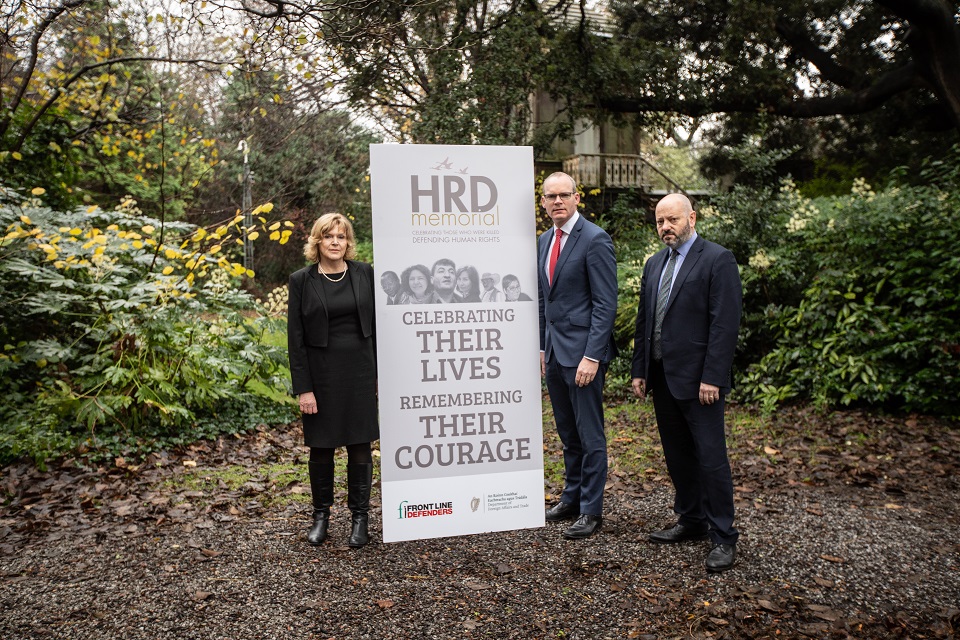 Today, on Human Rights Day and the 70th Anniversary of the Universal Declaration of Human Rights, Tánaiste and Minister for Foreign Affairs and Trade, Simon Coveney, T.D., announced plans for a memorial to Human Rights Defenders, to be developed by the Department of Foreign Affairs and Trade and Front Line Defenders. The memorial will be situated in the Iveagh House garden, with public access from Iveagh Gardens. The Tánaiste was joined to announce the initiative by founder of Front Line Defenders, Mary Lawlor, and executive director, Andrew Anderson.

Support for Human Rights Defenders is a long established priority in Irish foreign policy, and Ireland is recognised internationally as a leading advocate for the rights of those who promote and protect the rights of others. Ireland is committed to respecting and promoting human rights globally and engages actively on this issue at the United Nations, the EU and other international organisations.

Speaking of the significance of the memorial, the Tánaiste said:

This memorial is a remembrance of remarkably brave and inspiring individuals who paid the ultimate price in the cause of others. It is also a testament to our commitment to working with organisations like Front Line Defenders in promoting and protecting human rights throughout the world.”

“I am delighted to be working with the Tánaiste, Simon Coveney, and the Department of Foreign Affairs and Trade, on this exciting project. And it is fitting that this memorial will be situated in the grounds of Iveagh House, where the Irish government’s international human rights policy is formed. It was also here that the decision to push for EU Guidelines on Human Rights Defenders was announced prior to Ireland’s EU Presidency in 2004.”

“The killing of non-violent human rights defenders for their legitimate work for the rights of others should be a red line for governments both in their domestic and foreign policy. On this the 70th Anniversary of the Universal Declaration of Human Rights, Governments around the world should take stock and put in place systems to help prevent their murder by state and non-state actors.”

- Of those killed in 2017, 67% were engaged in the defence of land, environmental and indigenous peoples’ rights and nearly always in the context of large projects linked to extractive industries and big business.

- At the UN General Assembly in 2017, Ireland co-sponsored the resolution “Twentieth anniversary and promotion of the Declaration on the Right and Responsibility of Individuals, Groups and Organs of Society to Promote and Protect Universally Recognized Human Rights and Fundamental Freedoms”. This resolution calls upon all States to take all measures necessary to ensure the rights and safety of all persons, including human rights defenders, who exercise, inter alia, the rights to freedom of opinion, expression, peaceful assembly and association, which are essential for the promotion and protection of human rights.

- The memorial will be designed by Yvonne Farrell and Shelly McNamara of the internationally acclaimed Grafton Architects.

- Photos of Tánaiste and Minister for Foreign Affairs and Trade Simon Coveney T.D., Mary Lawlor and Andrew Anderson can be found here.