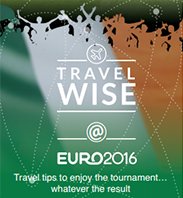 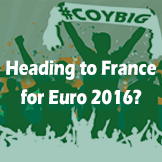 - 50,000 leaflets available to fans at tonight’s match at the Aviva

- Minister highlights importance of travel insurance, passport validity and registering with his Department

The Minister for Foreign Affairs and Trade, Mr. Charlie Flanagan TD, was today (Friday) joined by FAI President, John Delaney, at the launch of the Department of Foreign Affairs and Trade’s “Travel Wise” leaflet. The leaflet, created for fans travelling to Euro 2016, will be distributed at tonight’s friendly at the Aviva stadium when Ireland will play The Netherlands, where key messages contained in the leaflets will also appear on the big screens.

“I’m delighted to launch this fans’ information leaflet today as we look forward to Ireland’s opening game against Sweden, which is now just 17 days away. Leaflets will also be distributed at future games, in a number of select departure points in Ireland and by Irish Embassy staff in match locations in France.

“This purpose of this leaflet is to convey key information to enable them to travel safely and wisely and I would urge all those travelling to study it closely, either the hard copy or via our special Euro 2016 microsite www.dfa.ie/euro2016, and to bring a copy to France.

“In particular, any fans travelling should immediately purchase travel insurance, check their passport’s validity and register their details on our website so that we can contact them and their family in an emergency.

“This tournament is made all the more special for all of us on this island with the qualification of both the Republic of Ireland and Northern Ireland teams and I want to take this opportunity of wishing both teams the best of luck. I sincerely hope that the event will be an enjoyable and safe one for all attending. I am delighted to be joined today by FAI President, John Delaney. My Department is working closely with the FAI, Northern Ireland’s IFA, the Gardaí, UEFA and the authorities on the ground in France.”

“In addition to tips for a safe trip, the leaflet contains contact details for emergency services in France and our Embassy in Paris – which has a dedicated, emergency Euro 2016 phone line going live on June 10th. The number is 0033 144 176 780 and I would urge all those travelling to save this and other key numbers on their phones before they go.

“Irish consular officials will be present on the ground in Paris, Bordeaux and Lille around match dates to provide advice and consular services to citizens in difficulty."

“If Irish fans take care of themselves and their friends, I know that this will be another enjoyable and memorable tournament for both those who travel and the fans at home.

“I wish the Boys in Green all the best in tonight’s friendly.”