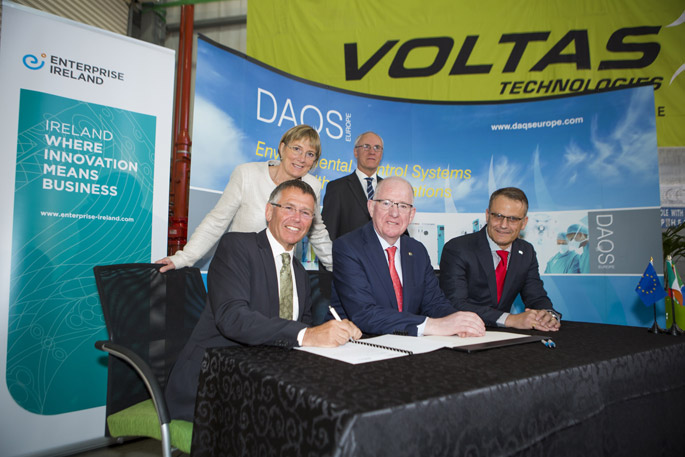 Contracts worth over €12 million for Irish companies are among the initial results of the trade mission to South Africa, led by Minister for Foreign Affairs and Trade, Charlie Flanagan, TD, this week. Minister Flanagan is today (Friday) concluding a four-day Enterprise Ireland trade mission to the South Africa.

Dozens of leads for Irish exporting companies have been created or progressed during the 4-day mission in which 34 Irish companies from all over Ireland participated in over 200 one-to-one meetings with South African companies targeting export opportunities across the technology, telecommunications, aviation, engineering, energy, food and financial services sectors.

Today Minister Flanagan also visited a school participating in the Amawele schools-twinning project which is supported by Irish Aid.

“I have been particularly struck by the energy, enthusiasm and innovation of the Irish companies participating in this trade mission, and the positive reception they have received here in South Africa. This is testament to the high level of preparation of the companies themselves, their strong networking abilities and the firm groundwork laid by the Embassy of Ireland, Pretoria and Enterprise Ireland over many years.

“I was delighted to have the opportunity during this visit to visit the Vuyani Primary School in the Gugulethu township on the outskirts of Cape Town and to meet with the children participating in the Amawele schools-twinning project which has been supported by my Department. I also met with the team managing the Amawele project here in South Africa and joined the children for a video-call with their twin-school in Ireland, St Columba's National School in the North Strand, Dublin.”

A number of contracts and partnership signings were announced during the trade mission, including partnership agreements between College Ireland Aviation Services (CIAS) and Mega Aviation Training Academy (MATA), Johannesburg, for the delivery of aviation training and academic programmes in Southern Africa, and between AuBren DAQS and Voltas Technologies, to introduce AuBren’s special brand of precision air handling systems to Africa. The latter is understood to have a value of €3m to €5m over the next four years and should see Portlaoise-based AuBren increase its international staffing by fifty per cent.

“A key element of Enterprise Ireland’s strategy is to grow indigenous Irish companies on a global scale. Ministerial-led trade missions provide a strong platform to promote Ireland and Irish companies as strategic partners across multiple sectors in key international markets. This trade mission has put a spotlight firmly on the range of great products and services coming out of Ireland. It has also highlighted the significant opportunity that exists within the African markets for innovative Irish companies. Of the 34 companies who participated on this mission, some have signed contracts. Others have made important contacts and will progress these in the coming months. Enterprise Ireland will continue to work closely with these companies as they grow their export sales in African markets and create jobs in Ireland.”

•In line with Enterprise Ireland’s strategy, the trade mission provides a key foundation on which to strengthen economic, political and cultural links with South Africa, one of the 27 priority markets identified in Government Trade, Tourism and Investment Strategy, a review of which was launched in February 2014. This mission, taking place seven months after President Higgins’ official visit, will help those Irish companies already active in the South African market to further develop sales and exports contacts, and strengthen their relationships with key contacts.

• Among the deals announced by Irish companies during the mission were:

College Ireland Aviation Services (CIAS) based in Leixlip, Co. Kildare, and Mega Aviation Training Academy (MATA) signed a significant agreement to form a partnership for the delivery of world class aviation training and academic programmes in Southern Africa. CIAS, originally an Irish Aviation Authority initiative, but now a standalone company, acts with over 20 Irish aviation companies and universities to provide a single solution in the areas of aviation training and education. The agreement will initially mean the provision of aircraft maintenance training to EASA (European Aviation Safety Agency Training) in Southern Africa but will expand to include elements of pilot training, cabin crew training, airline operations airport operations training, and under-graduate, post-graduate and Masters Programmes.

AuBren, Portlaoise, announced the introduction of its DAQs brand of precision air handling systems into Africa as an extension of the successful Voltas SUNWIND range. Targeted at public and private medical facility clients, the systems will be manufactured and supplied for Voltas Technologies, a leading South African provider of innovative integrated solutions for commercial HVAC projects. AuBren has worked extensively with Voltas Technologies to carefully localise the DAQS products to meet the commercial and technical needs of African markets.

• Amawele has received indirect Irish Aid funding through the grant support (2013, €34,740 and 2014, €30,000) from the WorldWise Global Schools consortium which is funded through the development education budget.