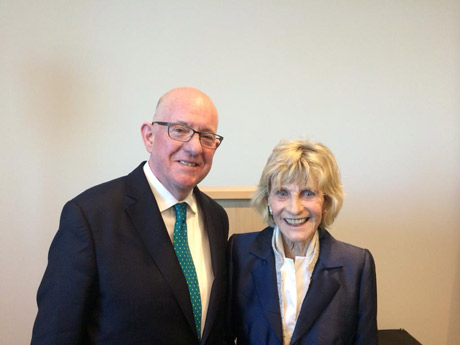 Minister for Foreign Affairs and Trade, Charlie Flanagan T.D., is today representing the Government at the official opening of the new Edward M Kennedy Institute in Boston.

The official opening will also include a special ceremony in the Institute's Senate Chamber -- a full-scale representation of the Senate Chamber in the US Capitol -- at which former US Senators, current US Senators and students from every state in the country will convene and inaugurate the Chamber.  There will then be a short reception at the JFK Presidential Library following the dedication.

Last night Minister Flanagan gave a speech at the gala VIP reception ahead of a 1000-guest dinner to mark the opening of the institute. The event was attended by Senator Kennedy’s widow and institute co-founder, Victoria Reggie Kennedy, many other members of the Kennedy family and a wide range of corporate, political, education and civic leaders.

Minister Flanagan, who was the only foreign dignitary invited to speak during the opening events, was invited to do so in honour of the deep connection between the Kennedy family and Ireland. During his remarks, he said:

“I’m delighted to represent the Government at the opening of an institute honouring the towering achievements of Senator Edward Kennedy, a great American and a great Irish American, a giant of American political life who never lost sight of his roots or those in need.

The late Senator Kennedy made an enormous difference to people’s lives, both in the US, where he represented the true spirit and heart of the US Senate during his 47 years of service, and in Ireland, where his unstinting commitment to achieving a lasting peace was essential to the eventual success of the peace process.

This institute will take forward his extraordinary legacy. It will  encourage others to follow his path of public service and to ensure, as he himself put it so eloquently, that ‘the work goes on, the cause endures, the hope still lives, and the dream shall never die.’”

The Edward M Kennedy Institute has been built on the campus of the University of Massachusetts Boston next to the John F. Kennedy Presidential Library and Museum. The centrepiece is a full-scale representation of the U.S. Senate chamber.

The EMK Institute is dedicated to educating the public about the US government, invigorating public discourse, encouraging participatory democracy, and inspiring the next generation of citizens and leaders to engage in the public square. The Institute will be a dynamic center of non-partisan learning and engagement that takes advantage of cutting-edge technology to provide each visitor and other participants with a unique and information rich, personalized experience that will bring challenging and fundamentally important historical and current debates to life.

The EMK Institute’s Columbia Point facility is a 68,000 square foot building located on the campus of the University of Massachusetts Boston (UMass Boston) and adjacent to the John F. Kennedy Presidential Library. This proximity will encourage visitors to explore both facilities. The two institutions will partner closely to build the Institute and a variety of programmes.