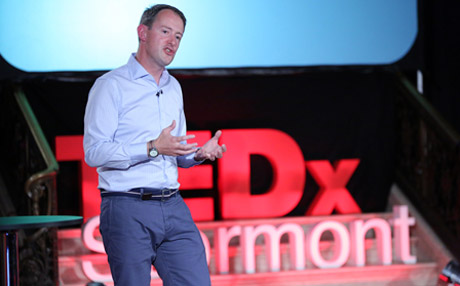 Minister for Development, Trade Promotion and North South Co-Operation, Seán Sherlock TD, spoke at a TEDx conference at Stormont today about the strong economic links North and South and our shared focus on innovation.

Addressing the conference, Minister Sherlock said: “Opportunities are now available on an All-Island basis that were never before possible. I want to harness the potential of our entrepreneurial and academic communities North & South to ensure that we are pushing the boundaries in all sectors so that the jobs of tomorrow are created today.”

Minister Sherlock, who is the first Government Minister with special responsibility for North South Co-operation, stressed the importance of working on an All-Island basis to maximise the benefits of cooperation, especially in the third level sector. Stronger partnerships will support recovery across the Island and ensure it is sustainable in the interests of all, he said.

“The PEACE and INTERREG Programmes continue to play a key role in supporting cross border and cross community co-operation in Northern Ireland and the Border region,” said Minister Sherlock.

“I want to acknowledge the great work that the SEUPB is doing in managing these programmes.”

The Minister held high-level discussions with officials including Chief Executive, Pat Colgan. The SEUPB is one of the North South Bodies established under the Good Friday Agreement and its primary function is the management of the EU cross border structural funds programmes, PEACE and INTERREG.

In relation to PEACE III and INTERREG IVA, the Minister noted that the priority now will be to ensure that expenditure targets are met and EU funds are fully drawn down, to maximise the benefit in terms of developing the peace process and the cross border economy. PEACE III has a budget of €333 million while the INTERREG funding amounts to €256 million.

The SEUPB has undertaken a consultation process for both the new PEACE programme and the successor INTERREG programme and drafts are currently being finalised.

TED was founded in 1984 as a one-off event. The annual conference began in 1990, in Monterey, California. TED's early emphasis was technology, entertainment and design (hence ‘TED’), consistent with its origins in the Silicon Valley.

The TED main conference is held annually in Vancouver, British Columbia. TED events are also held throughout North America and in Europe and Asia, offering live streaming of the talks.

The PEACE III Programme – is a European Union Structural Funds Programme aimed at reinforcing progress towards a peaceful and stable society and promoting reconciliation. A wide range of projects have been supported under this programme, from locally based PEACE action plans to the iconic PEACE Bridge over the River Foyle in Derry.

The INTERREG IVA Programme is a part of the overall inter-regional policy promoted by the EU over recent decades. High profile projects funded include rail projects such as the Enterprise and Boyne Viaduct upgrades and the North West Regional Science Park. The INTERREG programme covers Northern Ireland, the Border Counties and the West of Scotland.

Minister for Development, Trade Promotion and North South Co-Operation, Seán Sherlock TD, spoke at a TEDx conference at Stormont today about the strong economic links North and South and our shared focus on innovation.