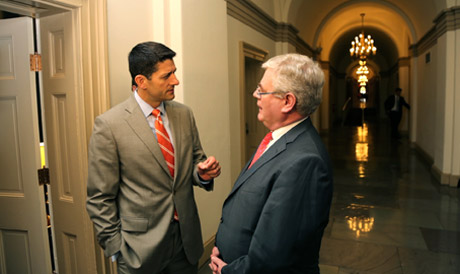 The Tánaiste on Capitol Hill in discussion with the former Vice-Presidential candidate, Congressman Paul Ryan

The Tánaiste will meet with several influential Republicans and Democrats on Capitol Hill, including former Vice-Presidential candidate Congressman Paul Ryan, to push for reform of the American immigration system.

During his meetings, the Tánaiste will also discuss the establishment of a visa regime for future legal migration between Ireland and the US as part of a comprehensive reform package.

Last year the US Senate approved a comprehensive immigration reform bill which would allow for a so-called “path to citizenship” for the almost 12 million undocumented migrants living in the US.

Since then, the focus has been on the Republican-controlled House of Representatives, where it is hoped cross-party support can still be secured for proposed reforms of the immigration system.

Speaking ahead of his departure, the Tánaiste said:

“We are focussed on trying to end the great hardship and uncertainty faced by undocumented Irish people living in the US, and by their families at home in Ireland.

Securing overall agreement on US immigration reform will continue to be a complex and difficult process, but I am here to make sure that the Irish dimension to this debate is kept to the fore.”

While in the US, the Tánaiste will also discuss the political talks in Northern Ireland with members of Congress and with Richard Haass. The Tánaiste will underline the need for progress in advance of the summer marching season and the importance of ongoing US engagement in the process.