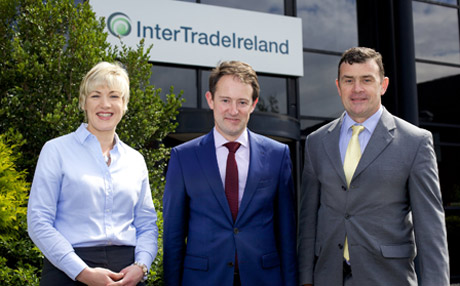 “This was an extremely positive visit,” said Minister Sherlock, the first Minister of State to be specifically handed responsibility for North South Co-Operation.

“The value of annual cross-border trade between Ireland and Northern Ireland is currently over €2.5 billion. The work of InterTradeIreland in providing supports for companies engaging in cross-border trade is crucial to ensuring that the economy grows its exporting capability, which is so vital for ensuring economic growth, jobs and prosperity. This importance is illustrated by recent InterTradeIreland research which indicates that experience gained in cross-border trade is a stepping stone for the majority of firms both north and south of the border and has a significant influence on the development of additional export markets for two-thirds of businesses.

“We must continue to grow the exporting and innovation capability and culture of SMEs on the island. Participation in collaborative research programmes such as the current €80 billion EU Horizon 2020 Research and Innovation programme, is essential to growing this innovation capacity.”

Minister Sherlock also met with officials at the North South Ministerial Council Secretariat based in Armagh.

I applaud the work of the North South Ministerial Council in focusing efforts on economic recovery through job creation, efficient use of public funds and effective delivery of services. I look forward to working closely with officials there in my roles as Minister for both North South Co-Operation, and also for Trade Promotion,” stressed Minister Sherlock.

“There are more opportunities for to focus the work of the Council in a way that makes a real difference to the lives of people on both sides of the border. I look forward to exploring those possibilities in order to bring about a fresh narrative on the All-island agenda.’