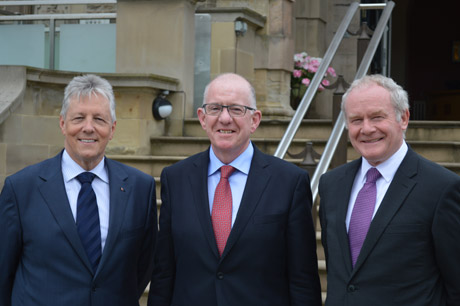 Charlie Flanagan TD, Minister for Foreign Affairs and Trade visited Belfast for a series of political and community engagements. In his first working visit to Northern Ireland since his appointment, Minister Flanagan met with First Minister Peter Robinson and with deputy First Minister Martin McGuinness.

He also met with Secretary of State Theresa Villiers to discuss how best to bring the political parties in Northern Ireland back to talks aimed at addressing key outstanding issues.

“I’ve been in regular contact with party leaders and with Secretary of State Villiers since my appointment.   I’m in Belfast to see how best we can ensure the effective functioning of partnership government within the Northern Ireland Executive, including the early resumption of the Party Leaders' Talks on flags, parades and dealing with the past.   Whilst the last month has been relatively peaceful, clearly contentious issues such as parading and flags continue to have an effect on community and political relations”.

In addition to further political talks with the leaders of the Alliance Party and the SDLP, Minister Flanagan met with a number of community leaders involved in grassroots work across Northern Ireland.