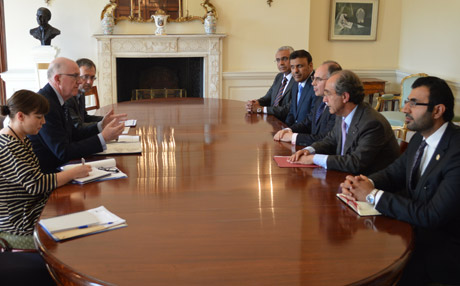 Minister Charlie Flanagan, TD, today met the Palestinian Ambassador, along with Ambassadors from Morocco and Saudi Arabia and representatives from the Egyptian and UAE Embassies.

The Minister for Foreign Affairs and Trade, Charlie Flanagan, TD, today met the Palestinian Ambassador, along with Ambassadors from Morocco and Saudi Arabia, and representatives from the Egyptian and UAE Embassies.

“I asked the Palestinian Ambassador to update me about the very dire humanitarian situation in Gaza. I reiterated Ireland’s position clearly - we want to see an immediate ceasefire,  the lifting of the blockade on Gaza which is at the root cause of this devastating conflict and ultimately the establishment of a two-state solution which is based on the borders of 1967.

“I made this position very clear at the meeting of EU Foreign Ministers in Brussels on Tuesday. We are also closely engaged with the United Nations and its agencies to see an end to this terrible cycle of violence and suffering, which is having a hugely disproportionate impact on the Palestinian people.

“It is essential that rocket attacks on Israel by Hamas and other militant groups also cease.

“I totally condemn the attack on the UN school in Gaza today which resulted in the death of at least 15 people. The high level of civilian casualties is unacceptable and I know that the Irish people are horrified, in particular, by the number of children who have been killed.

“I was also clear in my discussion with all of the Arab Ambassadors today that we need to see the levels of humanitarian aid and access to Gaza increased. The situation on the ground is nothing short of a human catastrophe.

“The peaceful resolution of the Israeli-Palestinian conflict will continue to be a major priority for Ireland. I also met last week with the Israeli Ambassador to express our deep concern about the escalating conflict and the shocking loss of hundreds of lives, many of them women and children.”

Egypt was represented by the Deputy Head of Mission Ahmed Mostafa

The UAE was represented by the Third Secretary Mohammed Al-Shamisi

The Minister for Foreign Affairs and Trade, Charlie Flanagan, TD, today met the Palestinian Ambassador, along with Ambassadors from Morocco, Saudi Arabia and representatives from the Egyptian and UAE Embassies.