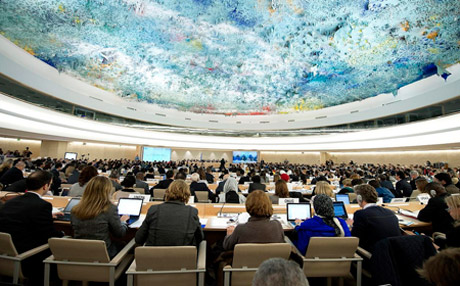 Ireland's Permanent Represenative to the United Nations in Geneva, Ambassador Patricia O'Brien, outlined Ireland's position on the situation in Gaza and Israel in the following statement delivered this morning, 23rd July:

"I would like to add some remarks to those made on our behalf in the statement of the European Union.

Irish people have been appalled by the upsurge of violence in Gaza, and especially the very high and unacceptable level of civilian casualties. Ireland condemns both the firing of missiles from Gaza into Israel by Hamas and other militant groups, and the killing of hundreds of civilians in military attacks by Israel on targets in Gaza which fail to respect the requirement under international law for any military action to be proportionate and discriminate. It is clear to us that neither side is paying adequate regard to the cost of their actions on innocent civilians.

We call for an immediate ceasefire by all parties, and we support and commend those international actors who are working to bring this about, especially the Government of Egypt.

We have been here before, discussing exactly the same thing. Ireland has repeatedly underlined that no ceasefire will last without a serious political effort to address the causes of the disastrous situation in Gaza. It is imperative to bring about an end of the restrictions imposed on the people by the continuing Israeli blockade and the general closing off of Gaza.

This should begin with the full implementation of Security Council Resolution 1860. The continued absence for people in Gaza of any political or economic perspective for the future is a breeding ground for extremist action.

Ireland fully accepts that the Government of Israel has the right to defend its people, but this right does not negate the rights of others. Any use of military force in self defence must be in accordance with international humanitarian law, and in particular must be both discriminate and proportionate. In view of the casualty figures, we do not believe that this has been the case.

We would also stress that the firing of missiles against Israeli civilian targets is without doubt contrary to international law.

In view of the very high casualty rate and the many allegations of violations of human rights and international humanitarian law arising from the current conflict, we would support the conduct of an appropriate investigation into breaches of international law."

Following discussions throughout the day on the resolution entitled “Ensuring respect for international law in the Occupied Palestinian Territory, including East Jerusalem”, Ireland, together with our EU partners, abstained on the resolution. The Explanation of Vote, on behalf of all EU members including Ireland, setting out the reasons for this abstention, is below:

I have the honor to speak on behalf of the Member States of the European Union that are members of the Human Rights Council. This explanation of vote was agreed by the EU as a whole.

We thank the main sponsors of the resolution entitled “Ensuring respect for international law in the Occupied Palestinian Territory, including East Jerusalem” for their efforts to conduct negotiations in an open manner and for the attention they paid to our concerns.

The EU has engaged constructively with the main sponsors with a view to achieving a meaningful and well-balanced text that would reflect accurately the human rights situation on the ground and not prejudge the outcome of any investigations. We are convinced that the most efficient way of reacting urgently to the alarming developments on the ground is to make use of existing mechanisms and available expertise, such as through a swift dispatching of an OHCHR inquiry mission to investigate all violations and abuses of international human rights and humanitarian law committed by both sides.

We regret that our suggestions to this effect have not been taken on board by the main sponsors. The proposed commission of inquiry, requiring a long process before starting its work, would not, in our view, provide a sufficiently rapid response to the urgent situation on the ground. In addition, the final draft text continues to be unbalanced, inaccurate, and prejudges the outcome of the investigation by making legal statements. The EU emphasises that the Commission of Inquiry pertains to all violations of international human rights law and international humanitarian law by all sides, including those committed by Hamas and other militant groups. The EU will closely monitor the implementation of the mandate and continue to work towards a balanced outcome of the investigations. The draft resolution also fails to condemn explicitly the indiscriminate firing of rockets into Israeli civilian areas as well as to recognize Israel´s legitimate right to defend itself. For this reason the EU cannot support this resolution and EU Member States who are members of this Council will abstain.

The EU would like to make clear that it has worked intensively throughout the day until the last minute with the authors of the resolution to find the text which we could support. We were prepared to continue working for this goal. Unfortunately, however we regret that it was not possible to reach a positive outcome. This is such an important issue with the suffering of so many people on both sides at stake that it would have been a far better testament to this Human Rights Council if we could have been united."