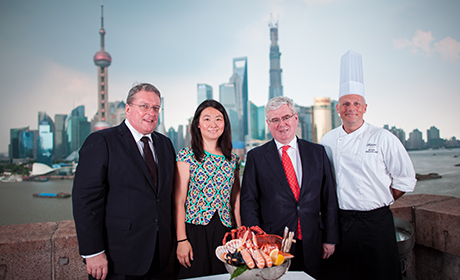 The Tánaiste and Minister for Foreign Affairs and Trade, Eamon Gilmore T.D., will today (Tuesday 30 July) begin a four day political and trade mission to China. The Tánaiste is travelling at the invitation of the Chinese Foreign Minister, Wang Yi, on what is the most senior visit by a member of the Government to China since that of the Taoiseach in March last year.

The visit - the first by the Tánaiste to China - will have a strong trade and investment focus as well as covering political and other bilateral matters.

As the world’s second largest economy, a strong relationship with China is vitally important in attracting investment and growing exports.

In Beijing, the Tánaiste will have discussions with the Chinese Foreign Minister, Wang Yi, and with Senior Communist Party leader, Chairman Yu Zhengsheng.

The Tánaiste will focus on delivering more from the Strategic Partnership Agreement between Ireland and China which was adopted in March last year.

Speaking ahead of his departure the Tánaiste said:

“This is a significant visit coming at a critical time in Ireland’s economic recovery.  In the period since the Strategic Partnership Agreement was reached there has been impressive progress made in Irish-Chinese relations.

“Irish trade with China is now worth over €8 billion a year, with a strong trade surplus in Ireland’s favour.  Enterprise Ireland has a target of €600 million in exports by its client companies by 2016, having seen a 19% increase during 2012 to €346m.  My visit to Beijing and Shanghai is an essential part of the work that the Government is doing on the ground in China to get us to that target.

“China is a priority market for Ireland and strengthening our relations with China - the world’s second largest economy - is critical to our exporters and to our economic recovery as a whole.

“The purpose of my visit is to strengthen the high-level political engagement necessary to deliver on the Strategic Partnership Agreement, to support Irish companies, and to promote Ireland as the best investment location for Chinese businesses looking to expand in Europe.

"Among the issues I will be raising will be access to the Chinese market for Irish beef.  Following on from our successful Presidency of the EU, I will also be discussing progress in EU-China relations, including our dialogue on human rights.”

Since the Strategic Partnership Agreement was adopted just over a year ago, seven Irish Government Ministers have visited China on trade missions.  On the Chinese side, there have been visits to Ireland by ten Ministers or other senior figures in the Chinese administration.

In addition to the high-level political meetings - essential for promoting trade and investment in a centrally planned economy such as China - the Tánaiste’s programme will include: