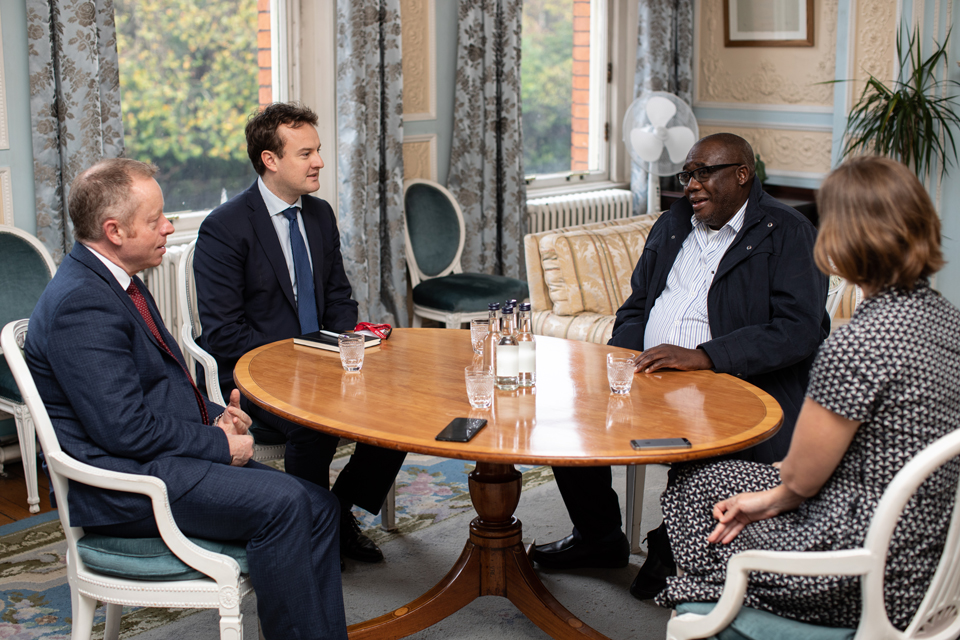 Today [Thursday 1 November], the Department of Foreign Affairs and Trade welcomes Mr. Thulani Mabaso to Dublin as part of the celebrations of the 25th anniversary of diplomatic relations between Ireland and South Africa and the centenary of Nelson Mandela’s birth.

Mr Mabaso is a former inmate of Robben Island, the infamous prison where members of the anti-apartheid movement in South Africa including Nelson Mandela, were jailed. In 2002, Mr Mabaso returned to Robben Island to work as a tour guide for visitors to ensure that the stories and legacy of the anti-apartheid movement are passed on to the next generation.

Mr Mabaso will visit the From Prisoner to President: Nelson Mandela Centenary Exhibition in Kilmainham Gaol, where he will review the strength and breadth of Ireland’s relationship with South Africa, from Ireland’s support for the anti-apartheid movement through to the vibrant and multifaceted partnership which exists between Ireland & South Africa today.

Mr Mabaso has spoken previously of the connection he and other inmates in Robben Island felt towards Ireland on hearing the story of the Dunnes Stores workers’ strike, and the work of the Irish Anti-Apartheid movement.  As Kilmainham Gaol once held some of Ireland’s best known freedom fighters, displaying the Nelson Mandela exhibition there holds special resonance, given the long period of his life spent behind bars.

As part of his visit, Mr. Mabaso will undertake a number of meetings and activities which can help to raise public awareness of the exhibition and of its key messages. These include press and media engagements, Q&A sessions with school tours visiting the Nelson Mandela Exhibition at Kilmainham Gaol, meeting with Irish Anti-Apartheid Movement members to express appreciation for their efforts, engagement with the Embassy of South Africa to Ireland, and a meeting with Minister of State for the Diaspora and International Development, Ciarán Cannon T.D. Mr Mabaso served as tour guide to both President Higgins and Minister Cannon, on their visits to Robben Island in 2014 and 2017, respectively.

Speaking ahead of his meeting with Mr. Mabaso, Minister Cannon said:

“I look forward to meeting with Mr. Mabaso again and am delighted to welcome him to Ireland, especially following the warm welcome extended to me when I visited Robben Island last year. During this, the 25th year of diplomatic relations between our two countries, I am especially pleased that many of our students and young people will have the opportunity to speak with Mr. Mabaso and learn about the strong friendship between our two countries.”

Tánaiste and Minister for Foreign Affairs and Trade, Mr Simon Coveney, T.D., announces the recipients of the Presidential Distinguished Service Awards for the Irish Abroad for 2018

A joint plan of action for enhanced bilateral and EU Cooperation is being released today (26 November) following the inaugural session of German-Irish consultations in Berlin at the level of State Secretaries and Secretaries General.

Minister of State for the Diaspora and International Development Ciarán Cannon, T.D., welcomes the launch of “Blazing a Trail: Lives and Legacies of Irish Diaspora Women” at EPIC museum

Tánaiste and Minister for Foreign Affairs and Trade, Simon Coveney, T.D., and Minister of State for European Affairs, Helen McEntee, T.D., are in Brussels today, Monday 19 November, for meetings with their counterparts at the General Affairs Council.

The Department of Foreign Affairs and Trade has issued an open invitation for submissions to the Third National Action Plan on Women, Peace and Security.

Tánaiste and Minister for Foreign Affairs and Trade Simon Coveney, T.D., has welcomed the appointment of Mary Robinson as Chair of The Elders.